For folks who grew up in before the internet became an everyday necessity, model making and make believe games were all the rage. We could conjure toys out of empty cartons, cardboard boxes, cans of soup and anything that would make a noise or resemble a car or an aeroplane. The kids who grew up with the internet, sadly never got to experience the thrill of pretending that a cardboard box can be a house or that an empty matchbox can be a remote control that can turn younger siblings into command-obeying zombie-robots! But all hope is not lost for the parent who wants his kid to experience the thrill of make believe games while teaching them a valuable lesson about how renewable energy works thanks to this 7 in 1 Solar Transformers kit.

The kit basically features a snap together plastic components, a solar panel and a battery station. The components can be snapped together to firm two power charging stations- one solar charging station and a battery charging station- and five type of vehicles including a concept race car, a dump truck, a bulldozer, a concept roadster and a solar car. Kids can either play with one type of vehicle or transform them as and when required and create their own Transformers style plays. The 7 in1 Rechargeable Solar Transformers can be charged via an AC outlet in around 5 seconds or via the solar panel that takes around 120 seconds to fully back up the battery. Unfortunately the battery lasts only for about a maximum of 80 seconds which might be a bit of a problem for modern kids with instant gratification needs.

On the plus side, the kid allows children to exercise their creativity and imagination and learn how to make models and how renewable energy can be used in everyday life. If the kit is able to get your kid away from his MMORPG even for a single Sunday afternoon, we’d say it would be totally worth the $19.99 that you spend on it.

All of us have been consumers of solar energy since ages. For instance solar calculators have been into existence since many decades. With increasing awareness about the environmental hazards that comes along with our modern life style, more and more people are focusing on ways to save the natural resources and conserve our planet. One of them is a solar power charger and external battery. And Soladec understood this need and exploited it towards its benefit. This company has developed All-in-One Portable Solar Power Charger and External Battery. This will help make our hectic lives easier and comfy without any complex technology involved. This will help you enjoy life on the go even when you travel towards remote areas where normal power is inaccessible. 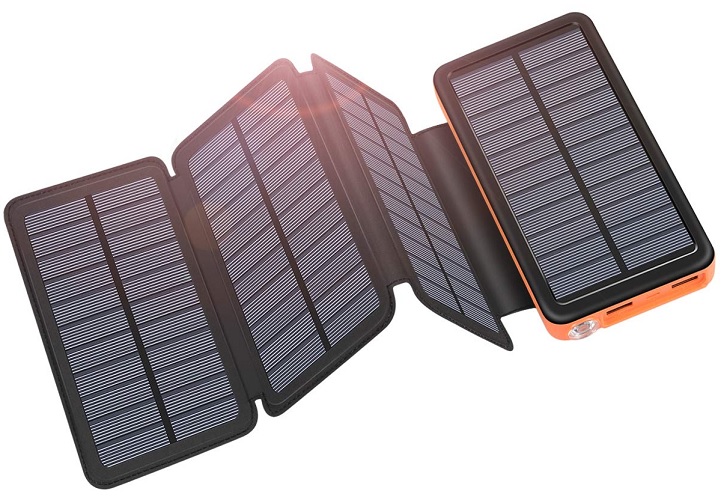 Sun is a natural resource which is available in abundance and as long as sun’s energy can be harnessed to charfe cellphones, we can be connected to anywhere anytime. The latest resourceful mono crystalline has been tapped to run the battery along with a solar cell module that helps to harness solar energy and convert it into electric energy. This helps in running your mobile device while you are on the move.

This sustainable device can be linked to almost any USB friendly devices. This All-in-One Portable Solar Power Charger and External Battery also has a high-flux LED lamp embedded into its structure. This helps in creating a perfect light model for the activities organized indoors and outdoors. This also comes handy in case of exigencies as it comes with an integrated rechargeable lithium battery. This battery has the capacity to remained charged without getting exhausted for up to two years. 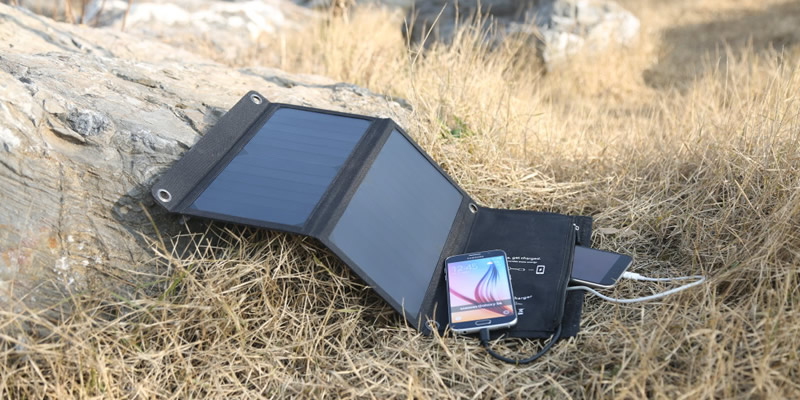 Harnessing solar energy helps in saving electricity bills and reduced energy consumption. It is a great way to go green and to add to the list of environment friendly products is the energy saving gadget – LG Solar power Bluetooth car kit. As you know talking while driving can be hazardous, but if you have a hands free kit, it can save you from being under the cop’s scanner and also protect you from any road mishaps. But managing the wires could also be a daunting task. To relieve you of all this stress, LG has launched the solar powered Bluetooth car kit. This will help you drive freely and simultaneously help you contribute your bit in saving the planet.

While using a hands free the wires can get twisted causing you more stress than relieving some, and some of them can also lead to a quick discharge of your battery. These limitations can inspire you to switch to wireless devices like LG Solar power Bluetooth car kit. This Bluetooth kit has an integrated solar panel that helps it to charge each time there is enough sunlight. This adds to its greener attribute. It also gives you a facility to charge your mobile phone in case of emergency situations by simple connecting the phone to the car kit with help of the supplied cables. Interesting, isn’t it?

This solar powered Bluetooth kit will give you a high-quality sound output as it has an in-built sound-reduction and echo-cancellation technology. Giving you a talk time of up to 16 hours and standby time of up to 1,000 hours, this trendy device also allows you to get connected with two handsets simultaneously.

Going outdoor is one of my routine weekend activity. Usually I bring iPod to listen my favorite musics through tiny earbug. But this time, I want to try my new Honeywell solar wireless speaker’s delivering music ability which I bought two day before for $299,9 from amazon.

Setting up the Honeywell speaker doesn’t need special skill or engineer capability. It’s about as easy as it gets. After putting my iPod into the dock and turning it on, the system automatically connects and starts working.

I was at 80-feet away from the loudspeaker and the wireless data stream can easily go through windows and walls. But, it seems that at close range, the unit suffers from occasional clicks and pops.

It won’t satisfy serious audiophiles, but the sound is surprisingly clear and rich. On the downside, it lacks stereo playback. Because the high-frequency audio is aimed upwards while the lower frequencies go down, the sound is well mixed and lively.
The loudspeaker is equipped with 2,000 mAh NiMH battery. It took a whole summer day to give the battery a full charge. There’s a cryptic battery gauge that shows the charge level that uses the system’s single LED light. But make sure that you have the manual with you because it’s hard to remember.

In its full charged, the loudspeaker can play music for 6 hours and 40 minutes at moderate volume. On the other hand, while you can easily turn the dock off, the speaker has no on-off switch.

For me, the Honeywell solar speaker is a great way to mix two of my favorite things: music and fun in the sun.

There are various brands of batteries that are useful for charging mobile devices off-the-grid, two of which are iCruiser and ALLPOWER. But both still have drawbacks. You must not far away from power for a certain period of time, if using iCruiser or devices by similar functions. If using ALLPOWER, you will worry about whether or not enough sunlight to ALLPOWER or devices by similar functions. 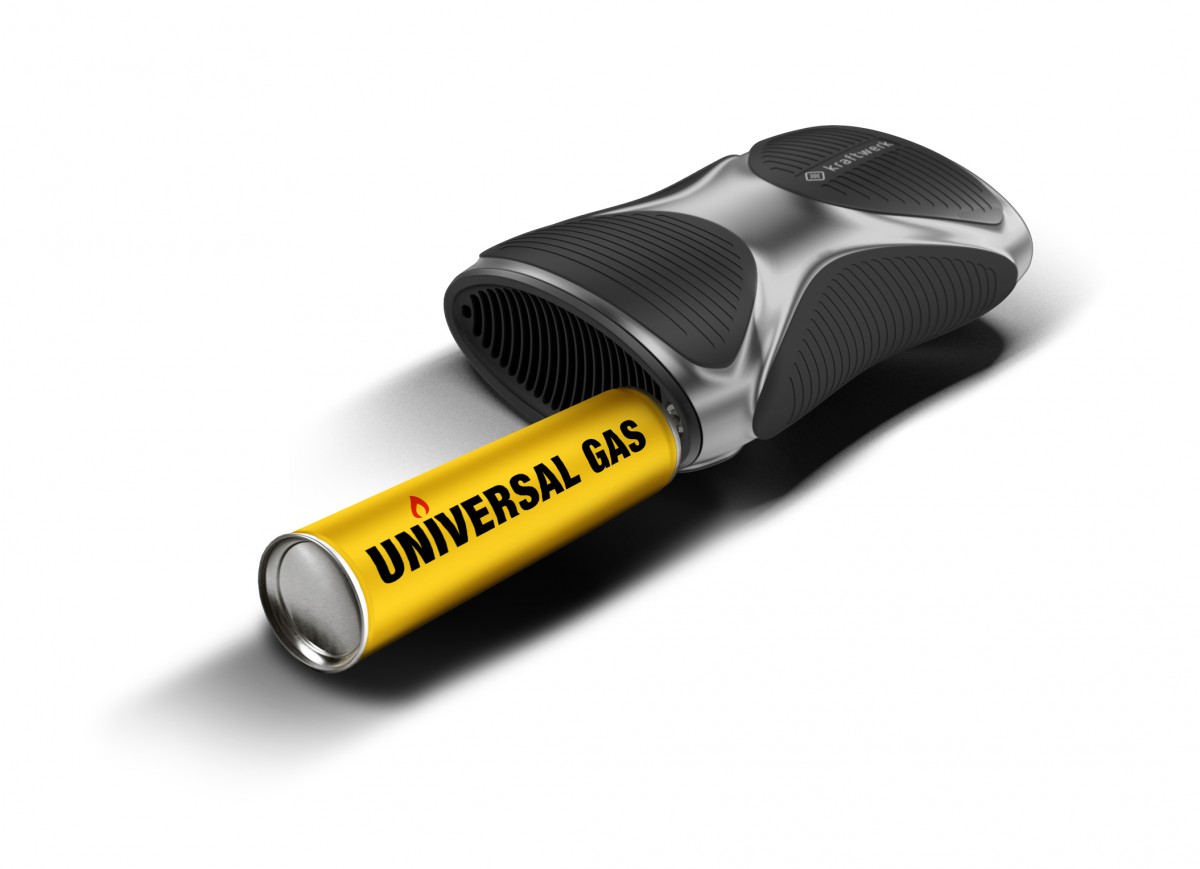 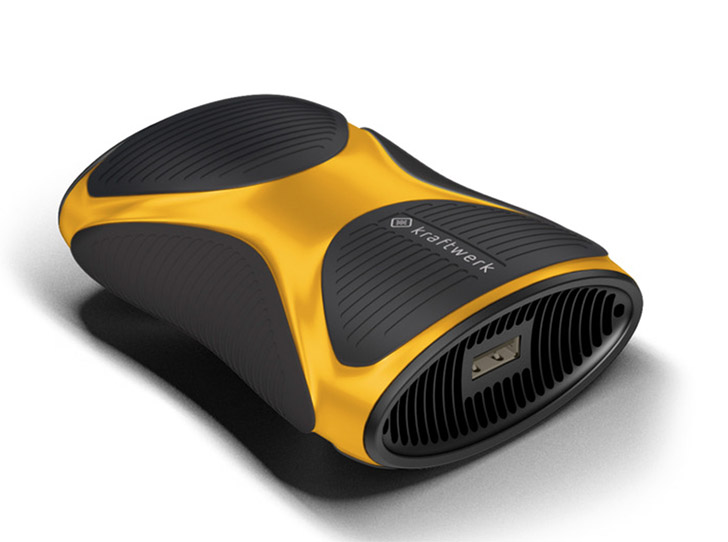 Another option might be a viable alternative in the future is created by Kraftwerk which brings the power of a fuel cell prototype packs for USB-powered devices.

Kraftwerk is taken from the German for “power plant”. The device works on the gas canisters and promised to charge your iPhone up to 11 times before needing a refill.

Here’s how these devices work, gas canisters, like we usually use to refill butane lighter or used in camping stoves, used to fill the internal tank. After the tank is full, thanks to the fuel cell system in it, it can be directly used to recharge mobile gadgets. Kraftwerk will notify its users if the gas in the tank is decreased by the LED system. Although promoted as a new technology in Kickstarter campaign to raise funds for production, Kraftwerk working principle is similar to the technology offered Lilliputian Systems Inc.

Did you know that someone who always works in front of a computer can be more environmentally friendly ?

Ones can achieve that by choosing energy-efficient personal computers. But there’s another way to be more earth friendly by choosing sustainable computer accessories. As you know that PC’s production process is emitting carbon and use a lot of material that is not easily recycled.

We can start by selecting the keyboard and mouse are made of natural materials, such as bamboo. 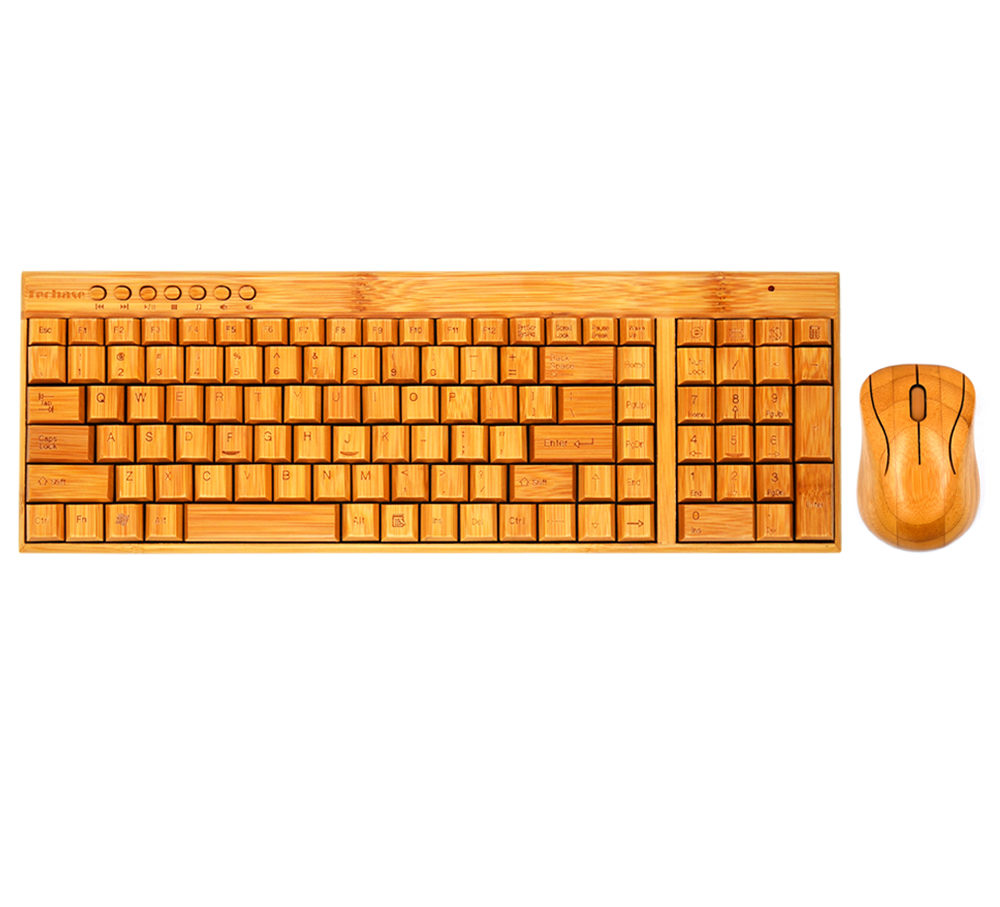 Bamboo is known as a material that is resistant to temperature and environmental changes. By adding a treatment, its resistance to moisture and water increase. This condition equalized bamboo with plastic material commonly used keyboard and mouse .

There are many bamboo keyboard and bamboo mouse you can choose to. One of them was made by Impecca. Impecca has made their bamboo keyboard with mouse hand-crafted. Impecca provide a USB Dongle to connect the keyboard and mouse wirelessly to a PC . Both are also compatible on all platforms . Its height also can be adjusted for comfort ergonomic reasons .

Need a touch of green on your iPhone? The simple and easy way is to replace the plastic or rubber casing of your iPhone with a casing made from natural ingredients. One of them is bamboo.

Ussually, bamboo case is generally designed to be slim and anti slip. The way to put it on your iPhone was likely different from rubber or plastic case. Bamboo case usually divided into several pieces with interlocking system. There is even a product that have you to put it on such you’re playing leggo.

Bamboo is naturally known for its strength. Therefore, bamboo case is durable and protective against bumps and scratches. Even though it has durability, there is a product that combines bamboo with plastic for better strength reasons. 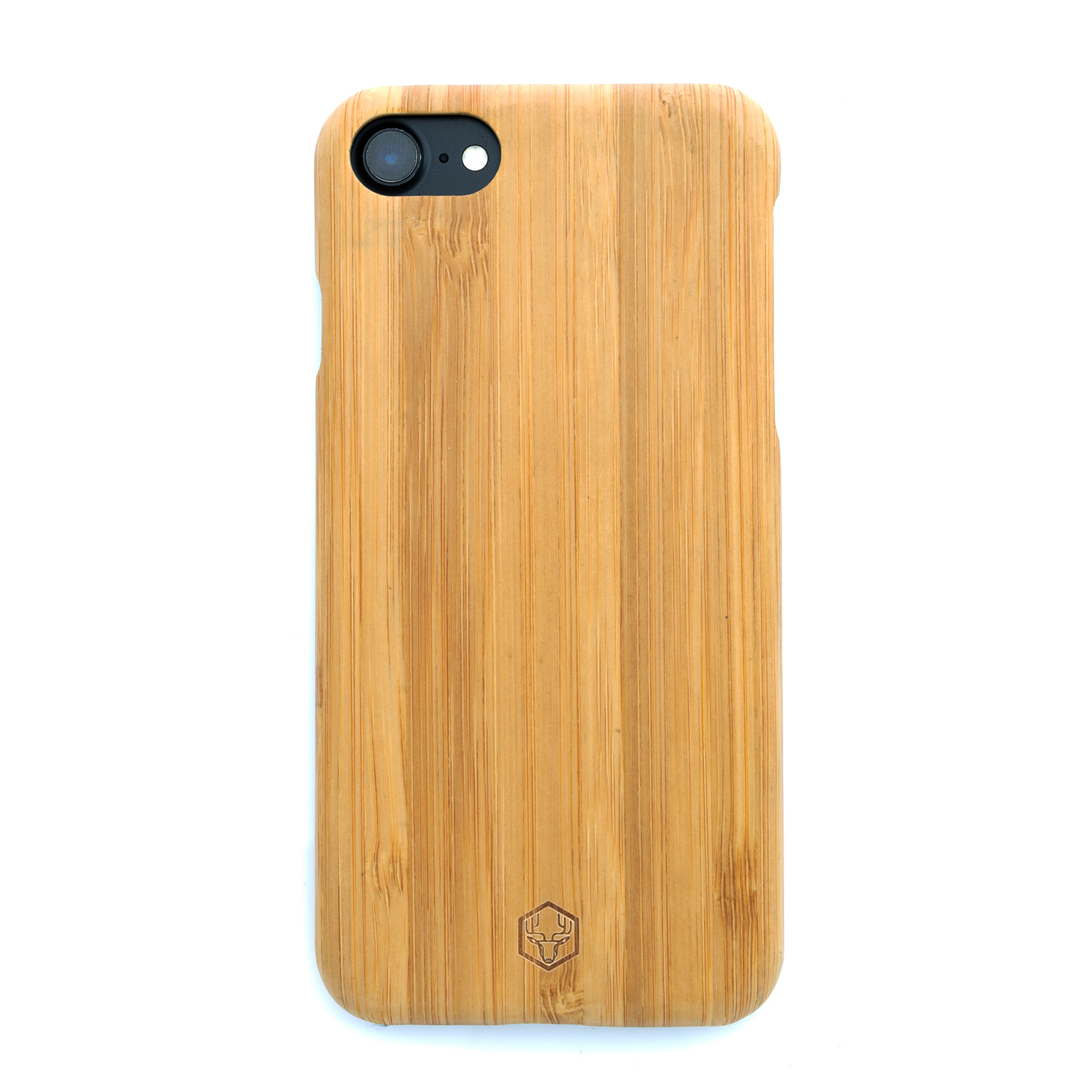 Before deciding to use bamboo case, you should take some of things listed below into your consideration:

It should be nice-looking and easy to put on. You do not want your iPhone like a weathered wood, don’t you? And do not waste your time just trying to put in on your iPhone. One more, make sure it’s design for your iPhone type, i.e iPhone 4, iPhone 4s or iPhone 5 and even newer versions too.

What if you hear a sound of something broken from your casing when you try to put it on? Remember to coat the casing that has not been coated with a protective material such as Rust-Oleum enamel. Choose the strong and durable ones.

Would be odd if there is something heavy in your pants pocket, right?

Be wise with the price and the design.